Vermont has a poet laureate, so why not a musical laureate? I propose Spencer Lewis, whose signature sound of layered violin and guitar has graced many a farmers’ market, town green, wedding reception and summer festival for the last three decades. His album titles such as In the Bosom of the Green Mountains, Gardener’s Rain, A Sense of Place and Lighter Than Fancy reveal his love of our rural traditions. 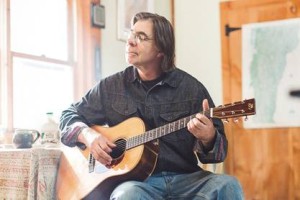 Spencer Lewis is the soundtrack to my own life. He accompanies me as I travel the state on writing adventures, work on the farm or unwind at my home along the Battenkill River.

But the most poignant moments come when my big family gathers for holiday meals and I load the stereo with his CDs. As the first crisp guitar notes and soaring violin drift down on my nearest and dearest, we instinctively pause, settle deeper into our chairs and reflect. This music bonds us as a family. Three generations, ages 84 to 6, from across the country, sharing a meal and celebrating Vermont’s gifts: Food raised on our farms and prepared in our kitchens, accompanied by the soulful melodies crafted by this poet and stonemason from Bethel.

As Spencer says, we find the people who resonate in our world.

Edible Green Mountains: Spencer, you’ve lived here since 1971. How have the land and people of Vermont inspired your music?

Spencer Lewis: Mike Cohen, the founder of the Trailside Country School, which I attended in 1969 when I was 16, had a philosophy that man and nature must not be apart. He took us all over America—we hiked and slept out every night. He brought the land to us; showed us what was still left, knowing that it could all disappear. But I needed a place to embrace nature, not just look at it. Vermont became that place for me as it became apparent that the land cannot be separated from the people, at least the people I interacted with: Vermonters cutting spruce boughs for spruce oil, making maple syrup, haying, me logging with a draft horse and on and on. It’s all a seamless integration.

EGM: What are some of your favorite venues to play?

SL: Sandy’s Books & Bakery in Rochester in late winter and Tinmouth Firehouse have been good to me over the years, with some memorable gigs in those places. Town gazebos are great fun in the summer. I play often in Ludlow and the audience is engaged and grateful. I’ve had the pleasure of opening the Heartwood/Fable Farm CSA events in Barnard for many years, but this year I played in the height of summer with my Folk Rock Project band. I also enjoy the craft-producer shows, with those massive white Camelot tents. Last year, at Celebrate Vermont in Stowe, I played with an augmented lineup of the Folk Rock Project and we went to the moon with that gig. In general, all the Craftproducer shows over the years are special. Sweet crowds, like the one in Manchester last year, with people who react to the “vibe” that is put out.

The idea is to play my best, be it a farmers’ market, bookstore or dinner hour at an inn.

EGM: Any particular eating or drinking habits when you play a gig?

SL: I like to have a decent meal before I play in a restaurant if it’s offered but nothing before a concert; I prefer to drink and eat afterward. I didn’t drink alcohol for 12 years but now appreciate the finer aspects of the craft beer movement. One beer is about perfect so I choose wisely and go for beers like Maine Brewing, Lawson’s Sip o’ Sunshine and the Heady Toppers of the world.

EGM: How did you come to music?

SL: My mom wanted my brother and me to have four years of formal music training. From age 8 to 12, I studied classical violin with a member of the New York Philharmonic. On my 13th birthday I got a guitar and started learning that. Over the years, layered violins and solo guitar have become my signature sound. I still shift between classical and fiddling style. I can thank my mom for making me play!

EGM: What appeals about the balance of stonework and music?

SL: Both are intuitive. I reach for a stone and it’s there … every time. Every morning I pick up my guitar—there’s a song waiting for me. I just have to tap into it and let it flow. Both allow me to trust in something beyond thought.

Yet it wasn’t always like that. Once, in the early days of transitioning to more stonework around 2001, I smashed my finger. I looked up in the sky and told the Great Maker: I need to do both. So get used to it.

Then, I hurt my hands again on a stone job, and when I couldn’t play, I realized how I took my health for granted. Never again. Since that day, I play every morning, for at least an hour and a half. Even when I am on the “rock pile,” as it is affectionately known. Except when a backhoe is waiting for me.

The sequence of building a stone wall is similar to how a song fits together. Stone walls have a strong bottom course, then middle, then the capstones. A song’s beginning is like the bottom course of the wall; the transitions and harmonies fit neatly together, often with magic and serendipity. The main riff is the foundation, then the melody dances over the top.

Music is inside; stonework is outside.

EGM: Both crafts require physical stamina and mental focus. How do you fortify yourself?

SL: I give music the best part of the day, right after breakfast, and rarely come out until about 2pm. Then, I need to face the rest of the world, see the day, walk up the mountain behind my house and chop wood—whatever. But the best part of my energy was spent in those first few hours.

As a stonemason, I make a point of eating lunch. I rarely stop what I’m doing: Lunch takes about three minutes or I lay stones while I’m eating. If it’s a local job, I get my “Lillisville” sandwich from the Bethel Village Sandwich Shop. To hydrate, I drink Gatorade. Someone told me how to make my own organic drink using maple syrup but I’ve been lazy.

EGM: How would you describe yourself as a cook?

SL: I have a nice routine living alone: A fresh organic salad every night, pan-fried taters, grilled marinated chicken, peanut butter and jelly with artisan bread like Waitsfield Common or Elmore Mountain. My pancakes from scratch are famous among my friends and two daughters. I’m now using gluten-free buckwheat flour. And of course maple syrup.

EGM: Vermont food that sustains you while working or traveling?

SL: Chef’s Market in Randolph keeps me going with some incredible takeout meals: burritos, full dinners to-go usually made of organic products, and I have a Vermont Flatbread once a week, usually Three Cheese.

Sandy’s Books & Bakery in Rochester offers a great meal before their “Cabin Fever Music Night.” Across the street I have one of my music listening stations in the Rochester Café where I get a classic breakfast every time I restock the CDs. Great home fries, the measure of any breakfast. The tacos at Fable Farm are also good.

EGM: Since the holidays are upon us, any seasonal meal traditions?

SL: The last few years both my daughters have been away. But I love Thanksgiving turkey from Stonewood. My daughter Sage shares my zeal for the holiday with creative side dishes such as her amazing sweet potato dish; I never eat sweet potato any other time of year. It just doesn’t taste like sweet potatoes. That’s why I like it.

EGM: Come summer, what grows well in your garden?

SL: What I know, I can successfully grow: carrots, tomatoes, potatoes and corn. The rest I get from local markets—Fable Farm and farmers’ markets where I play or can attend.

SL: I throw the I Ching once a month for a compass: Lao Tzu and Chuang Tzu after him. Dylan paved the way as well as another folk-rocker John Stewart. Eric Andersen’s intimate approach has helped, and Jack Elliott’s flat-picking has inspired me as well as Woody Guthrie, who inspired him. And it goes on like that….

SL: Make the music your own. Incorporate it into your life and listen for the music in the wind or in the river. Feel it in the dirt, in the garden or the weeds that you’re pulling.

Don’t think it has to give you money all the time. Stonework actually lengthened my musical career by giving me the one thing that an artist needs more than anything: time.