Standing in the corner of the brightly lit warehouse is a cylindrical drum resting on four sturdy legs. The wrought-iron facing, decorated with swirls and scrolls, shows signs of wear. A slightly rusted square pan sits at the base below a round opening, a catch bin of some sort. The juxtaposition of this century-old apparatus in a state-of-the-art commercial factory raises the question: What’s this antique doing here? This piece of machinery, the Royal Roaster #4, inspired Paul Ralston to create the Vermont Coffee Company.

In the late 1970s, Paul was walking in the Bowery district of New York City in search of used restaurant equipment for a bakery he had recently bought. He passed an open doorway and saw smoke billowing out. Inside, a man in a white apron stood next to a machine, with flames licking a rotating drum. Paul had never seen or smelled coffee being roasted before. He stood transfixed, staring at the contraption and savoring the intense aroma. The man scooped the roasted beans into a brown paper sack and handed it to Paul. When Paul brewed them at home, the taste launched him back to his Italian grandmother’s kitchen table.

For his grandmother Esther, there was only one true coffee: a smoky-sweet dark roast she brewed in a stovetop espresso pot. And there was only one way to enjoy that brew: with family and friends. To this day, Paul Ralston maintains that sensibility, evident in his company’s mission statement, “Coffee roasted for friends.” Soon after that life-changing encounter with the coffee roaster in the Bowery, Paul tracked down a 1914 Royal #4 right in Bristol. He installed it in the front window of the Bristol Bakery, which he bought in 1977. And then reality set in.

“I had no idea how to roast coffee,” he admitted. “There were no books, no Internet, no one else was roasting in the area. And I still had to find coffee beans!” He did some research and found a woman named Erna Knutsen in San Francisco, the godmother of the specialty coffee business. She shipped Paul a pallet of green beans and he set to work.

Paul had a memorable virgin run. “The first time I fired up the Royal, it was night, when I generally did my baking. The flames were doing their thing under the drum, the beans were going around the pan. All of sudden, the Bristol Volunteer Fire Department came screaming down Main Street, lights flashing, and jumped out in front of the bakery. I had no idea that black smoke was billowing out the front window where the chimney pipe vented. Someone saw the smoke and thought the building was on fire. So I guess the Bristol firemen were the first folks to try my coffee.” 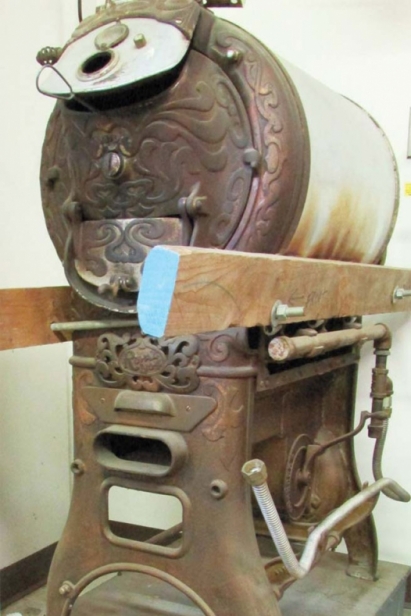 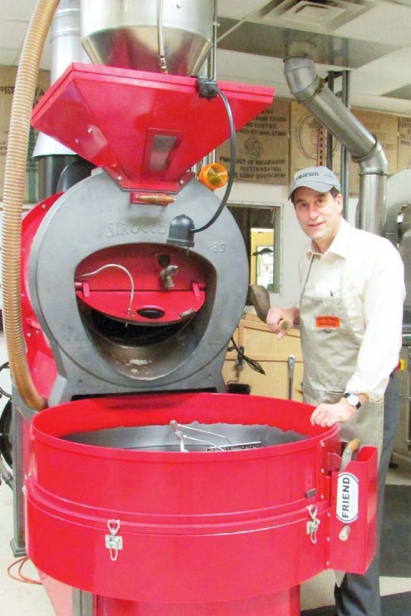 Paul sold the Bristol Bakery in 1983 but never stopped roasting coffee. While pursuing a business degree at Trinity College in Burlington, he built a cart, got a vending license and peddled espresso on Church Street. “Hawking food is the ultimate retail experience because you get instant customer feedback,” said Paul. What he learned is that no one was interested in espresso in the early 1980s. The entrepreneur shifted his product line to pretzels and that business took off. Paul attended classes during the day and worked his cart after school and on weekends.

After he earned his degree in 1986, Paul and his wife moved to San Francisco, where they experienced a lively coffee culture. In 1989, an earthquake struck the city, which he heeded as a signal to return to Vermont. He spent the next decade working in the skin care business in Vermont (Autumn Harp) and in London (Body Shop International). Around holiday time each year, Paul would fire up the Royal #4, which lived in his garage, and roast a couple hundred pounds of beans for family and friends, packing them in hand-decorated brown paper bags.

The millennium approached and Paul felt ready for a change. He took a year off to refocus and plan his next move. “I spent a lot of time in my garage, sitting in my rocking chair next to the woodstove. I had a blackboard where I sketched out potential ideas.” Those chalk musings steadily morphed into what would become Vermont Coffee Roasters. Twenty years of roasting coffee and hearing people’s positive feedback convinced him it was time to make a business of his pleasure.

In 2001, Paul rented out a small space in Bristol where he spent the next five years building Vermont Coffee Company. He was committed to sourcing organic and fair-trade coffee as much as possible. Two of his mentors—Anita Roddick, creator of The Body Shop International, and Sister Janice Ryan, former president of Trinity College in Burlington—had introduced him to the socially responsible business model. These women proved that business could be a force for constructive engagement, cultural preservation and community restoration. To that end, Paul found coffee brokers who shared his philosophy, one in Montreal and the other in New Jersey. To this day, they connect him with the finest beans from the coffee lands: Tanzania, Sumatra, Indonesia, Peru, Mexico, Nicaragua.

Ten years ago, Paul fostered a connection in the Dominican Republic and began to work with 100 coffee farmers there. The goal was to improve cultivation methods, which would benefit both the farmers and the end product. This experiment resulted in the Alta Gracia and Tres Mariposas lines of single-origin coffee. This project required considerable collaboration with several international organizations and nonprofits. Starting this spring, a new line, Café Dominicano, will be introduced with three blends: Uno, Dos and Tres. This brand will support farmers in the three communities that produce the beans for Paul.

Vermont Coffee Company also helped fund a Dominican nursery for coffee plants, eventually growing half a million healthy cultivars in 2012. Organic compost and fertilizer were introduced, which dramatically improved the yield and quality per acre. Paul’s company helped pay for organic certification, which produced a better bean and improved the economic conditions of the farmers. He firmly believes that “The most important thing we can do is to pay a fair price for beans. The farmers earn a fair wage and the consumers enjoy a quality product.”

Paul is understandably proud of the work that has been accomplished in the Dominican Republic. “Dominican coffee has always been underrated so we are pleased to have raised that profile. In fact, at an international competition in 2010, several judges tasted our Dominican coffee and thought it was Jamaican Blue Mountain, one of the most highly regarded coffees in the world!”

Back in Vermont, the company continued to expand, outgrowing the Bristol space and moving to a new facility in Middlebury in 2006. Vermont Coffee Company now employs 16 people with diverse talents to ensure creative collaboration. “It’s a very loyal tribe. I just find the right blend of people and everything else falls into place,” Paul said. The company imports approximately 400,000 pounds of coffee beans a year. Every batch is roasted and shipped out the same day to ensure maximum quality.

“We treat our coffee like fresh produce because that’s what it is—a farm product.”

Ever the entrepreneur and innovator, Paul seeks creative new ventures. Coffee and beer? Why not! Vermont Coffee Company is just down the road from Otter Creek Brewery, and this proximity gave rise to Wolaver’s Alta Gracia Coffee Porter, a rich brown beer that combines the Dominican coffee with hints of vanilla bean. The beer is now Otter Creek’s top seasonal seller. Long Trail Brewery also makes an Imperial Stout with Paul’s coffee, a popular spring release. Other collaborations include Strafford Creamery’s use of the dark roast in their coffee ice cream. Paul indicated that a number of specialty food producers incorporate his coffee into their creations, from coffee soda to barbecue sauce. “Our organic certification and roast profile hold up well in any food or beverage process.” A liquid coffee concentrate is available commercially for restaurants and the food industry. Maplefields uses the concentrate for its Iced Maple Coffee, a rich blend of coffee, cream and pure maple syrup, which is a customer favorite in the warmer months. For Paul, being part of another company’s product exemplifies the unique Vermont community, where friends work with friends.

“Coffee roasted for friends” serves as a guiding mantra. Snapshots of “friends” enjoying their coffee products cover a large wall in the company’s entrance foyer. The business’s crisp white tent is a welcome presence at fairs around the state. Last summer, the company started a program called “Shaking for Shelter” where they made and sold iced coffee shakes at public events; proceeds went to support homeless shelters in Chittenden and Addison counties. At the holidays, Vermont Coffee collaborates with other roasters around the state, donating coffee to community food shelves.

Paul recalled another unique venture: “One year, we partnered with Green Mountain Coffee. We provided beans from the Dominican Republic, and Green Mountain did the roasting and packaging. It was a really fun project: big company, little company, but still part of the same community. We distributed about 8,000 pounds—four tons—to every food shelf in the state!”

For all the successes and challenges over 34 years, Paul’s greatest joy remains drinking a cup of his own coffee. “I get up every morning and brew myself a mug of coffee. I put three tablespoons of dark roast grounds in a Melitta filter and pour boiling water over it. Then I have my coffee and read the paper. I’m doing quality control as I sip, tasting it as a consumer but enjoying it as a producer.” Grandmother Esther would surely approve.

FUN FACTS FROM THE ROASTERY, THE HEART OF VERMONT COFFEE COMPANY