Catching Some Rye – Bourbon and Rum – at The Albany Distilling Company

Here’s the essence: Whereas a brewer adds hops to make beer, a spirits distiller takes a combination of grains (rye, corn, wheat, barley), mills them to fine powder, mashes with yeast and water and lets them ferment into a thick burping gruel in enormous tubs. After three days, that porridge is transferred to a series of stills where it boils, vaporizes and condenses into a crystal- clear distillate known as ethanol. Yup, the same stuff that’s in our gas tanks.

So what distinguishes car fuel from amber elixir?

John Curtin and Rick Sicari, owners of the Albany Distilling Company, obsess over those rotund casks. John named his tabby cat “Cooper” in homage to the vessels that bewitch ethanol into ethereal whiskey. And Rick? “I wake up at night in a cold sweat worrying about our barrel supply.” 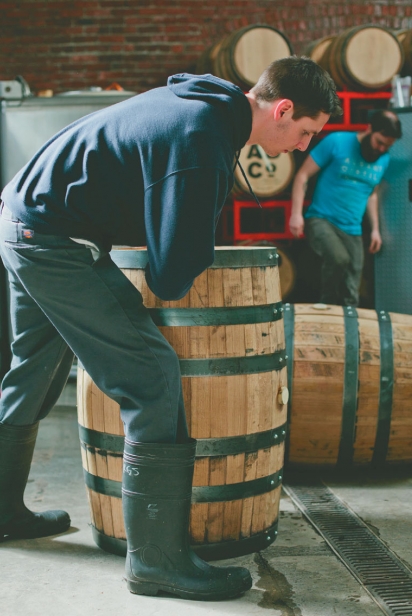 Albany Distilling Company, established in 2011, is the first distillery to operate in the capital city since Prohibition ended in 1933. It’s located in a brick warehouse adjacent to the Albany Pump Station, just steps away from the site of the Quackenbush Still House, Albany’s original 18th-century rum distillery.

As any distiller knows, a spirit’s character is created by grain and oak barrels. The grain shapes the essence and the barrel enriches the flavor. Thanks to the New York Farm Distillery Law, John and Rick source 100% of their grain from New York farms. Their barrels come from wherever they can find them: Minnesota, Kentucky, Missouri.

However, the explosion in craft distilleries—and breweries, wineries and cideries—has created a dire shortage of oak barrels, which everyone uses to age their products. Under federal law, whiskey must age in new barrels made of charred American white oak. Those barrels contain natural resins, sugars and other organic compounds that infuse the spirits with an amber hue and rich flavor.

Without those oaken urns, we would be sippin’ moonshine instead of aged whiskey. White, or new, whiskey—the clear liquid from the still—is technically not whiskey until it encounters oak. White whiskey takes a brief nap of 30 minutes in an oak barrel whereas bourbon and rye slumber for at least nine months.

So how did John Curtin, a former English teacher, go from teaching Catcher in the Rye to distilling rye whiskey? He had an epiphany of sorts in 2010 and began wondering why no one had opened a distillery in Albany. “It just seemed like a no-brainer,” said John. So he and a friend, Matt Jager, researched the possibility and found it worth pursuing. All they needed was a space. 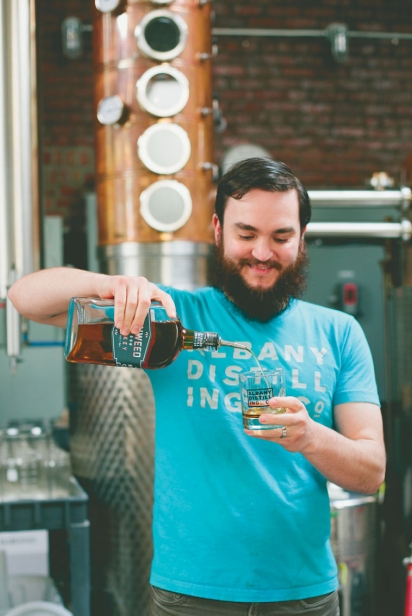 “We were actually having a beer at the Albany Pump Station and talking about our search for a location,” John said. “The bartender said the place right next door was available: a 1,400-square-foot industrial warehouse with exposed brick and several skylights. Seven months of red tape followed but by January 2012 we had moved in and started renovation and construction.” For the next four months, they worked seven days a week cleaning, scraping and painting from dawn to dusk. “We didn’t have any lights or else we would have kept going after dark!” John said.

Next came the still which they ordered from Germany. It took the Germans six months to build and then another five weeks to ship across the Atlantic. Several months passed before the still was re-assembled in the Albany facility. Then the real fun began as the distillers learned to master the equipment: three enormous vats in brushed steel and gleaming copper with a bewildering array of brass fittings and glass-faced dials. 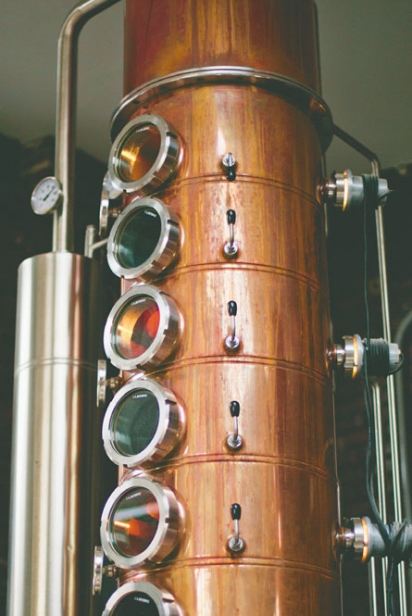 But on October 5, 2012, the Albany Distilling Company officially opened for business. “We were bottling and slapping on labels through the night to get ready,” said John. Nineteen months from the day of incorporation to ushering in their first customers, but he maintains that time flew by.

Matt Jager eventually went back to teaching at the College of Saint Rose. Rick Sicari came on board in July 2014, putting his MBA to use along with his skills as a brewer. Rick had worked at the Saratoga Brewery for a year and then pursued more formal training at brewing schools in Chicago and Munich. While in Europe, he toured countless breweries. Whether beer or booze, Rick clearly loves geeking out on the science of distilling. 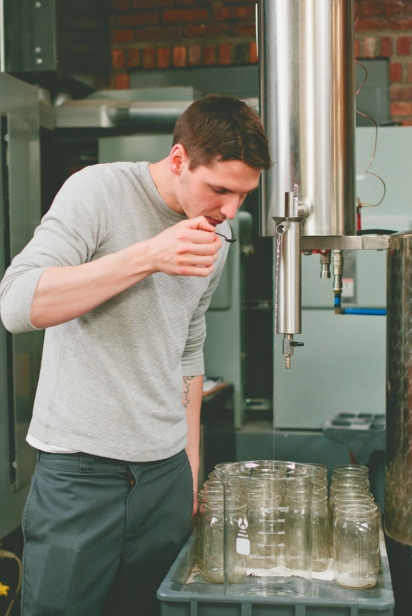 Both agree that John is the creative guy and resident historian while Rick is Mr. Efficiency. John, 33, hails from Slingerlands and Rick, 29, was raised in Saratoga. Their love for the capital city is reflected in the names of their products: Quackenbush Still House rum, a nod to Albany’s original rum distillery, and Ironweed whiskey in honor of William Kennedy’s Pulitzer Prize–winning novel. “Bill came through for a tour, and we gave him a hat with our Ironweed logo. He loved it!” crowed John, an English major at University of Albany.

John and Rick produce both rye and bourbon, in addition to a white whiskey called Coalyard. They also distill rum made with Caribbean molasses. The whiskies are available for tasting and purchase at the distillery. However, since the rum is made with non–New York product, it cannot be sampled or bought on site, according to the farm distillery law. In 2014, Ironweed Rye took gold at the American Craft Spirits Association competition and bronze at the American Distilling Institute; Quackenbush rum earned bronze at that same judging.

Rye was the first whiskey distilled in America. The grain grew well in the northeastern colonies, and it was cheap. Immigrants from Ireland and Scotland already knew how to make whiskey so they turned to the abundant rye. George Washington himself made rye whiskey with grain he grew and harvested at Mount Vernon.

So what distinguishes rye from bourbon? In analogous beer terms, rye is to India pale ale as bourbon is to lager. Rye exudes a spicy, peppery overtone whereas bourbon possesses a softer sweetness thanks to the corn. Think rye bread versus corn bread. Both have a hint of honey and vanilla deriving from caramelized sugars in the charred oak barrels.

The Quackenbush rum comes in original, amber and spiced. John got in touch with the archeologist who oversaw the excavation of the original distillery. They found the recipe and now, “We create the rum exactly as our predecessors did over a hundred years ago,” John said. The rum is aged in barrels still wet with whiskey, which enhances the flavor. The molasses-based Caribbean rum has a more complex profile than mass-produced rums that use simpler sugars and additives.

Neophytes and connoisseurs alike will appreciate Albany Distilling Company’s highly informative tour, which includes a guided tasting. Tours take place on Thursday and Saturday afternoons and last about an hour. After the tasting, guests can linger over a drink mixed there at the cozy bar. Of particular note are three cocktails: the Ironweed Old Fashioned made with rye, Luxardo maraschino cherry, orange bitters and soda; the Moss Coal Mule, a twist on the classic Moscow Mule, with Coalyard white whiskey, Adirondack ginger ale, lime and fresh ginger; and the Scofflaw, composed of Ironweed bourbon, Atsby dry vermouth, housemade grenadine, grapefruit bitters and a twist of lemon.

Right from the start, John knew he wanted to create spirits made from New York State grains so he applied for a New York Farm Distillery license. To qualify, one must incorporate at least 75% New York farm product. The Farm Distillery Act, established in 2007, allows distilleries to do tastings and sell cocktails and bottles of liquor on site. Owners can also offer samples and sell at farmers’ markets. Distillers get the advantage of significantly reduced licensing fees, and farmers benefit by having a steady market for their product. With such supportive regulations, New York is one of the best states in which to open a craft distillery (or brewery, winery or cidery, for that matter) In 2011, 10 distilleries were registered in New York. In 2014, that number rocketed to more than 60 and interest continues to surge. New York boasts the second-highest number of craft distilleries in the nation—behind Washington State, which has around 90.

Said Dean Norton, president of the New York Farm Bureau, “The Farm Bureau has been a strong supporter of increasing opportunities for our farmer members. The opportunity created by the new farm category of [alcohol] licenses has opened new possibilities for growth.” He continued, “I’ve seen firsthand the excitement of our farmers when their kids return to the farm and embrace the beverage sector and plant new crops.”

Rick explained: “We want the flavors of New York to come through in each sip. Rye and corn thrive here, so we are lucky to have access to these top-notch ingredients. You can’t make a high-quality spirit with merely average raw materials. It’s like having a top chef try to prepare an excellent meal using ingredients from a fast-food restaurant. Just can’t be done.”

So what challenges loom? “The barrel shortage, of course,” Rick said, “and sometimes it’s hard to procure enough malted wheat and barley. Meeting demand is another challenge. We opened a barrel last week, and it’s almost gone. Demand far exceeds what we can produce.”

John added, “We don’t want to engage new markets [liquor stores or bars] because we want to be able to honor our current loyal customers. We’re trying not to expand too quickly. But that being said, we’re beginning to ramp up production by bringing on Luc Schallehn as our third distiller.”

What’s next? Pine Bush gin. A new still arrived in March and the men spent the spring developing their recipe and blends of botanical infusions. The first batches will be on the shelf by early summer.

John philosophized: “When the economy is good, people drink. When the economy is tough, people drink.” Talk about job security for hooch makers! As people consider the impact their wallet can have on the local economy, “We show the value of supporting New York farmers. We could buy cheap corn and grain from the Midwest but we choose to support our state,” Rick said.

John’s final words? “Our competition is the big guys, the national brands that make up 99.9% of the market share. We smaller distillers should band together. The more presence we can make as local spirits, that’s when the tide begins to turn. And as we know, a rising tide carries all boats. Craft brewers are already making a dent in the beer industry. I think craft spirits will begin to have the same impact in the coming years. I would love to see the day when someone walks into a liquor store and instead of someone choosing between Jack [Daniel’s] and Jim [Beam], they’re choosing between a whiskey made in Albany or Schenectady.”

Nothing could make these two diehard distillers happier.

Except for a steady supply of those oak barrels. 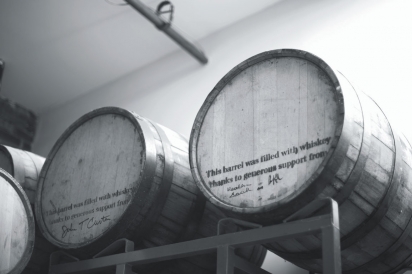 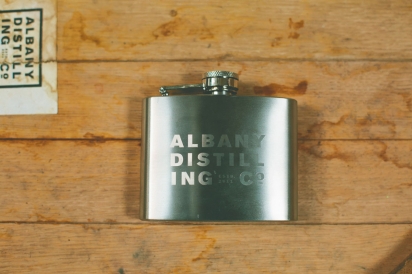